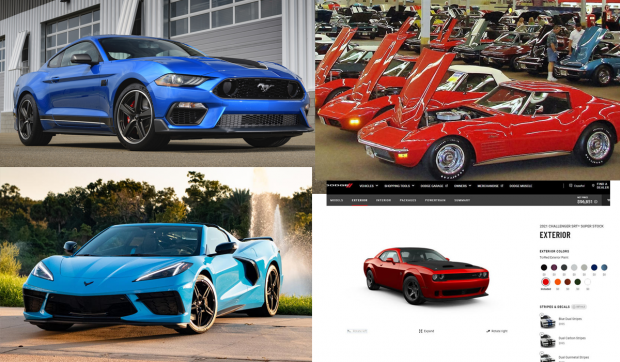 Saying that the year 2020 has been a weird one is an understatement. However, muscle car makers have been beavering away in the background, prepping everyone for a hopefully more exciting 2021.

All the leading muscle and pony car manufacturers have new vehicles in store for 2021. Some of these you will already know about, while others are new to the table. 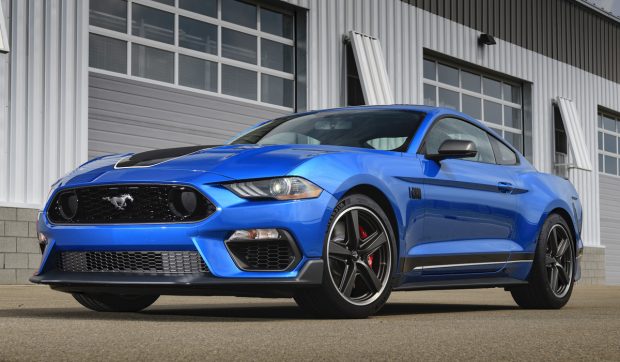 There have been polarized viewpoints and lots of chin-scratching over the electric Mustang Mach-E SUV. Mainly due to Ford reviving the iconic ‘Mach’ name, then sticking it on an electric SUV. Now Ford will release a 2021 Mustang Mach 1 car, which should be more in line with what we expect for the ‘Mach’ name.

The Ford Mustang is now in its sixth generation, the present version being in its seventh consecutive year. The Mach 1 should come with a 5 liter, 480bhp V8. The same powerplant as housed in the Bullitt edition. Options for transmissions are either a 6-speed manual or a 10 speed automatic. A handling package will also be available.

The front of the car should be slightly tweaked with the addition of a rear aerodynamics package. This will include a rear wing, Brembo brakes, large exhaust tips, and diffusers. The suspension setup has elements lifted from the Shelby GT350 and GT500, which also include 19-inch wheels and magnetic dampers.

The Mustang range will also be treated to the Co-Pilot360 suite, which adds in loads of driver-assist functionality. Other fancy features that come as standard in 2021 will be rain-sensing wipers and safety belt reminders. The GT500 will also be treated to a new carbon fiber handling package which includes 20-inch carbon fiber wheels, adjustable struts, and oil catch can. However, the GT350 and the performance pack level 2 won’t be available in 2021. 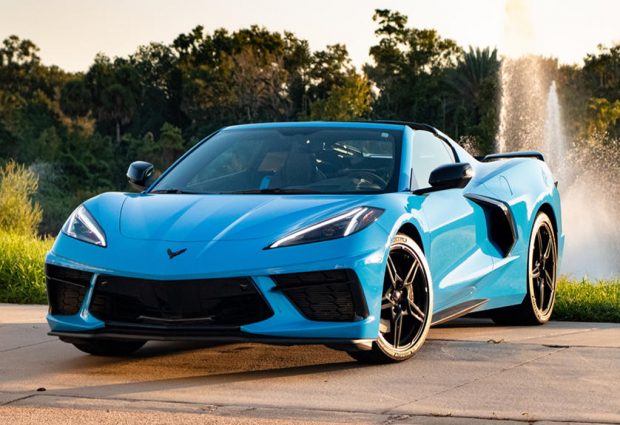 If you’re a car company releasing a groundbreaking new vehicle, you don’t exactly expect a strike and global pandemic to feature in your timetable. This has been the case with the Corvette C8, who are now hitting their 20,000 vehicle targets. 2021 models should be hitting showrooms by the end of 2020.

Production of the new Corvette has been in overdrive, with production running to December 23, restarting on January 4. This should have pumped out an extra 500 to 600 extra 2021 models for existing backorders.

The 2021 models will have slight upgrades, with the colors Red Mist and Silver Flare Metallic now being available. Android Auto and Apple CarPlay come as standard, with magnetic ride control suspension now available as an option. Prices will also stay the same in 2021, with base models starting at $59,995 which includes destination fees. The same engine is also in place, the 6.2 liter 495hp, 470lb.ft of torque V8.

For those interested in the development of the Chevrolet Corvette C8, the video below is a good starting point. The video documents feedback from members of the Corvette development team, such as Tom Peters the former director of exterior design. 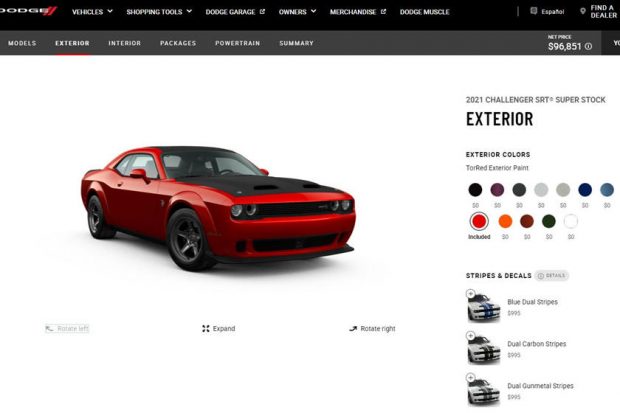 Just when you thought the Hellcat variants couldn’t get any bigger, Dodge dropped the ‘Super Stock‘ in 2020 with 807HP. Dragstrip optimized, the Super Stock can do 0 to 60 mph in 3.25 seconds and a quarter-mile in 10.5 seconds. Both the Super Stock and the Redeye now have online configurators letting you build and play with your own custom setup.

The Super Stock is obviously the priciest of the bunch at $96,851, with a starting price of $79,595. Additional costs include $995 for over body stripes, $3,495 for a satin black hood, roof, and trunk graphics, $425 for black hood pins, $595 for black brake calipers, and $995 for an SRT performance spoiler. There are also plenty of interior options, with the cheapest option being the $1 rear seat deletion.

If you prefer the SRT Hellcat Redeye, then prices start at $78,595, going up to $88,330, with a $6,000 discount. Many of the same options are available to the Hellcat as per the Super Stock, such as the 13 paint options, three-season tires, and black, gunmetal grey, or orange brake calipers. Interior options are also cheaper with the Hellcat.

The redesigned 2022 Toyota Sequoia is just around the corner. This SUV is top-rated and is one of the best selling in the United States. Reportedly, the next generation 2022 Toyota Sequoia will arrive next year, and it should introduce a couple of upgrades. Recently, some of the first rendering images emerged, and we must...

Ford has updated it’s best selling mid-size SUV for the year 2021. The new Explorer has got some minor tweaks and the brand has also added a sports appearance package. Here you can find out the Ford Explorer price in India, launch date, specs & key features. This 7-seater SUV competes with the likes of...